I was bored. And PMSing.

Now all of Rebecca’s vinyl dolls are bald. 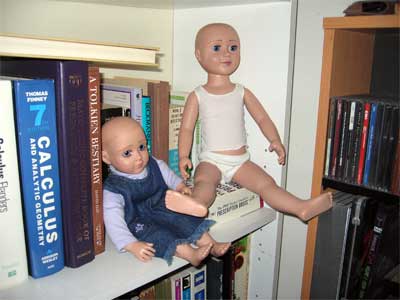 This is actually in improvement, really and truly, because their wigs were pretty fried. I did try to fix them (careful brushing with a doll brush, detangling with my fingertips, restyling, removing the last few inches of fried-ness), but they just wouldn’t fix.

So now they are bald, and I have ordered $10 of replacement wigs, and they will soon be good as new.

Annoyed at the world, check.

Completely bothered by everything, check.

Insane enough to bathe three cats in one go, check.

Ah, the joys of PMS.

* Candles, candleholders, a vase, and a crystal platter.
* Space for my set of Martha Stewart storage containers that I purchased to replace my missing Gladware. They arrived the day before Thanksgiving, much to my relief, because otherwise leftover storage would have been difficult and messy.
* Rose-shaped scented soaps.
* Skewers.
* Light bulbs, light bulbs, light bulbs. Did I mention light bulbs?

* Baby bottle nipples so old that the rubber had degraded. Becca claimed one silicone one so she could feed her baby dolls with a bottle.
* The shredding part of a cheese grater that I no longer own.
* A telephone book from 2004.

Thankfully, my kitchen is almost entirely organized. It still needs a little work in the hotspot near the oven, but that pile has been slowly reduced as I’ve been cleaning in other areas. I also need to sort through the kids’ shoes and figure out what is too small, what is out of season, and what is worn through.

END_OF_DOCUMENT_TOKEN_TO_BE_REPLACED

We have banned television. Period. This has led to a lot of sulking and grousing because there is no longer a selection of Magic School Bus, Between the Lions, and Cyberchase to watch. While we were sick (and that’s about two weeks, now, with one thing or another), the children developed the habit of sneaking downstairs at the crack of dawn and watching PBS indiscriminately (and that means all of the shows that I loathe, including The Berenstein Bears, Barney, Dragon Tails, and Caillou). That habit is now being broken. Slowly. Painfully. With much grousing and grumping and muttering about the unfairness of life.

I am currently holding my status as The Worst Mother Ever, and gaining in the It’s Not Fair and But I Used to Do This departments of parenting.

Also, now that the kitchen table has been cleaned off completely, there is great progress in the But I Don’t Like This department of dining. Previously, I’d been settling. Pasta with tomato sauce. Vegetable roll-ups. Yes, yes, all fairly healthy foods, but kind of a pain, in that no matter what I made, the kids would demand “their food”.

No longer. Now, they eat dinner (and that includes some of everything on nights where it is pasta with beef stew or the like) or they do not eat dinner. Eating dinner gets applause (although I’m considering the use of stickers or a magnetic chart) and cookies (because I’m at the end of my rope on this issue). Not eating dinner means an immediate bath and up to their room until stories and bedtime.

I’m working on it.