Posted on 16 November 2020 | Comments Off on Persimmons

Comments Off on Persimmons

Comments Off on Into the woods

Today’s adventure in taking things apart and hopefully fixing them: Becca’s passed down mid-2012 MacBook Air needed an LCD cable replacement so it could be passed down to Abby for online school. It now needs a new iSight camera… so far.

Hopefully the WiFi cable survived what has been one of the most unfriendly teardowns yet. I still have to test the battery, but it’ll have to wait on more parts before I reassemble this monstrosity.

Comments Off on Sunday always comes too late

I bought 48 white tie-on masks with the intention of tie dyeing them with my daughters because whatever the next few months bring, it looks like masks are going to be a thing. What I didn’t realize when I bought them was that they have a polyester outer layer, which is the opposite of easy to dye.

I did some reading and figured that the high temperature setting (almost boiling) of dyes for synthetic fabrics was the important part, because I really, really wanted lots of colors.

Enter sous vide bags — or as the kids put it, “Mom is obsessing again.”

We started by rubber banding masks the night before. There are a couple of tricks and techniques you can use. We found that leftover orthodontic rubber bands worked great for tying the polyester layer to achieve finer detail, and normal bands worked for creating whitespace in patterns. 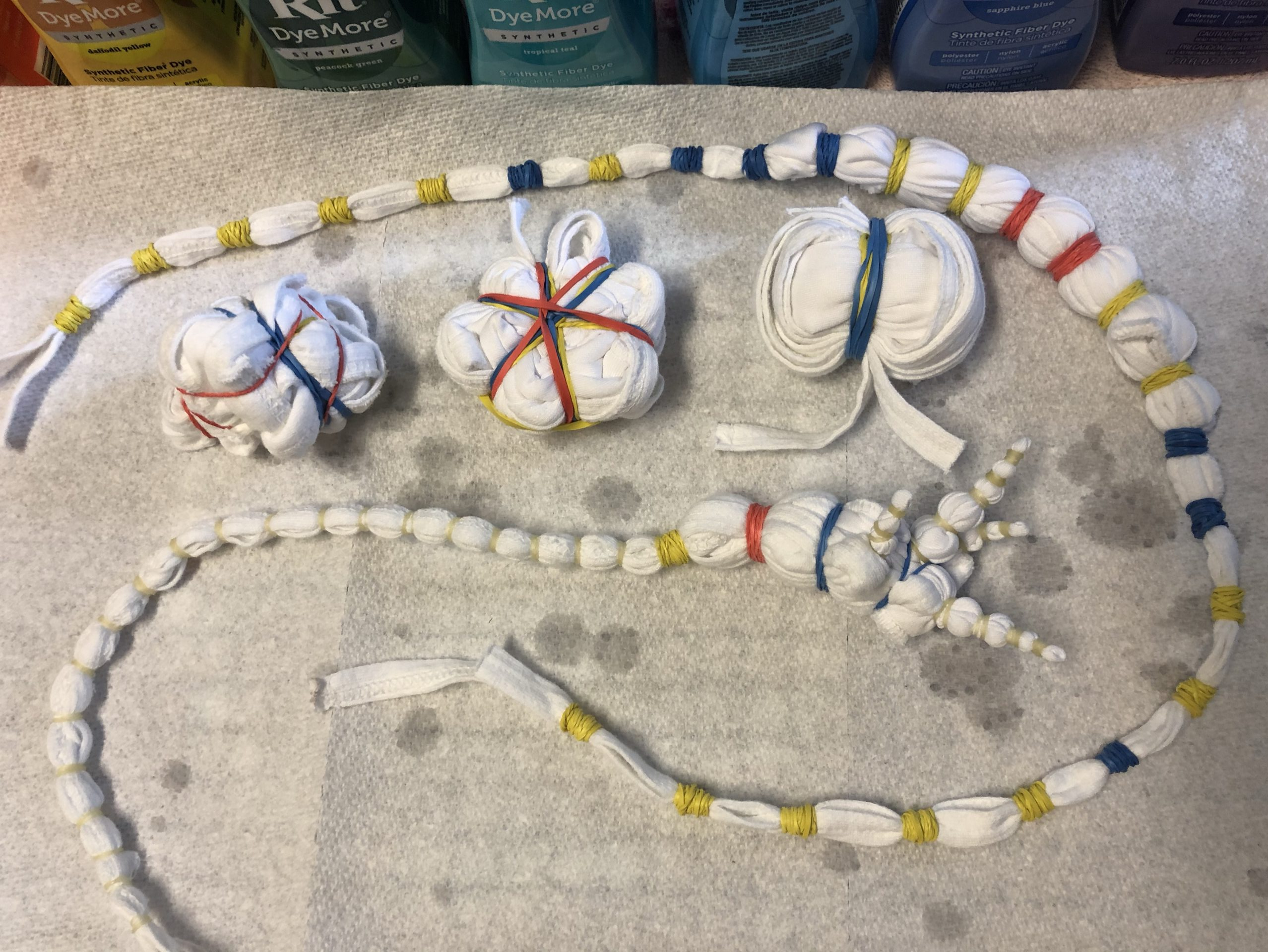 Top: Stripes. Second row: Galaxy, Swirl, Penant (keep twisting until it spirals in on itself and bisect). Third row: Bullseye.

I mixed up tie dye bottles by adding one or two drops of dish washing liquid to the bottle, and then adding Rit DyeMore and near-boiling water in a 1:8 ratio. I wanted the dye to be more saturated than it would be in a dye bath, since whatever dye was in the sous vide bag would be all that was available to dye the fabric. I’m not sure the high temperature was necessary; it certainly made the first couple of minutes more exciting than they needed to be. 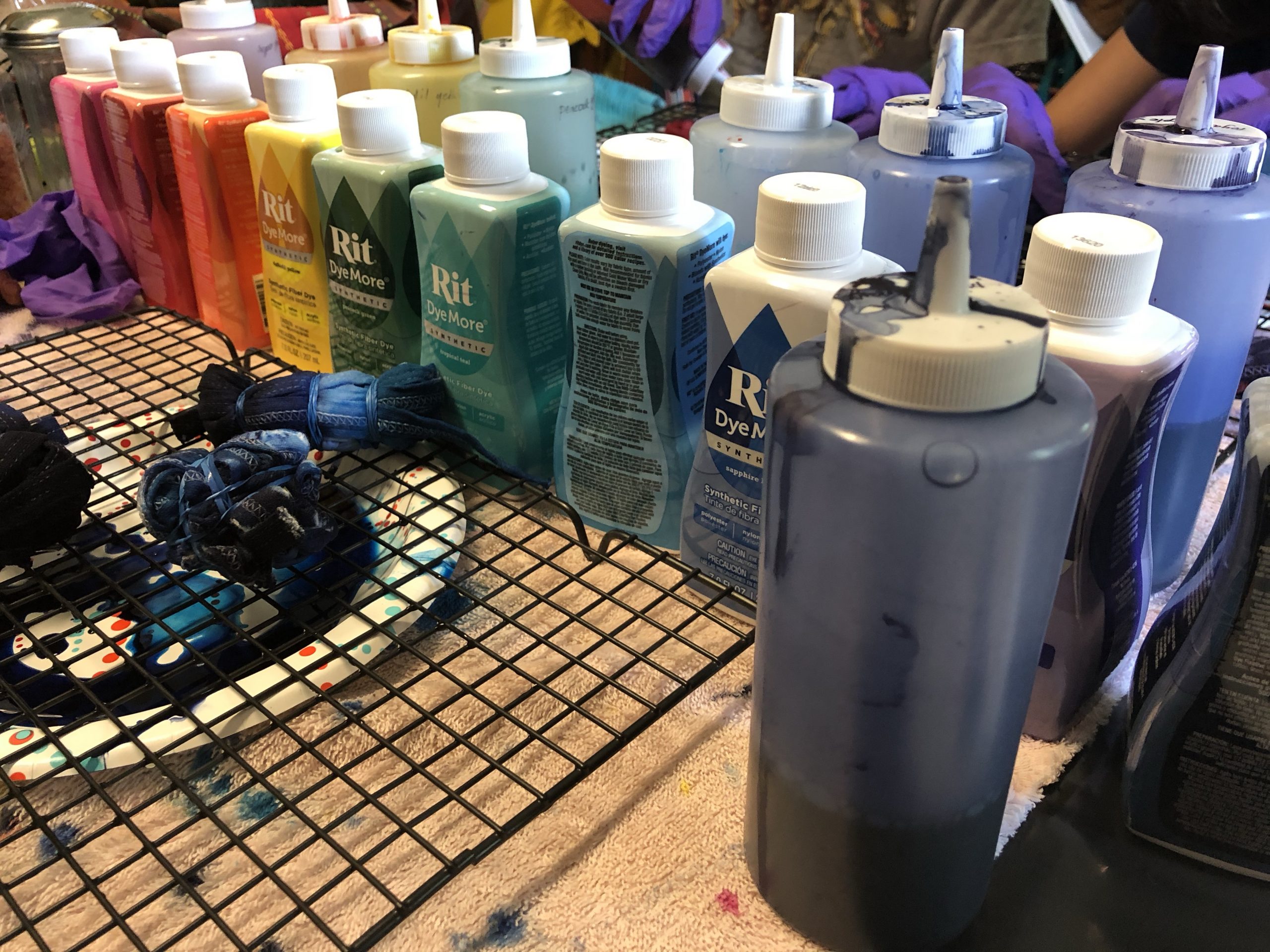 I am not very good at choosing just one color.

I set up old wire racks over paper plates to catch most of the dye, on top of an old towel, on top of a contractor bag. This was all happening in my kitchen and I really didn’t want a mess. Every so often, we would replace the paper plate to avoid accidental spatter from the colors below the rack. Adding a paper towel would probably also solve this issue. 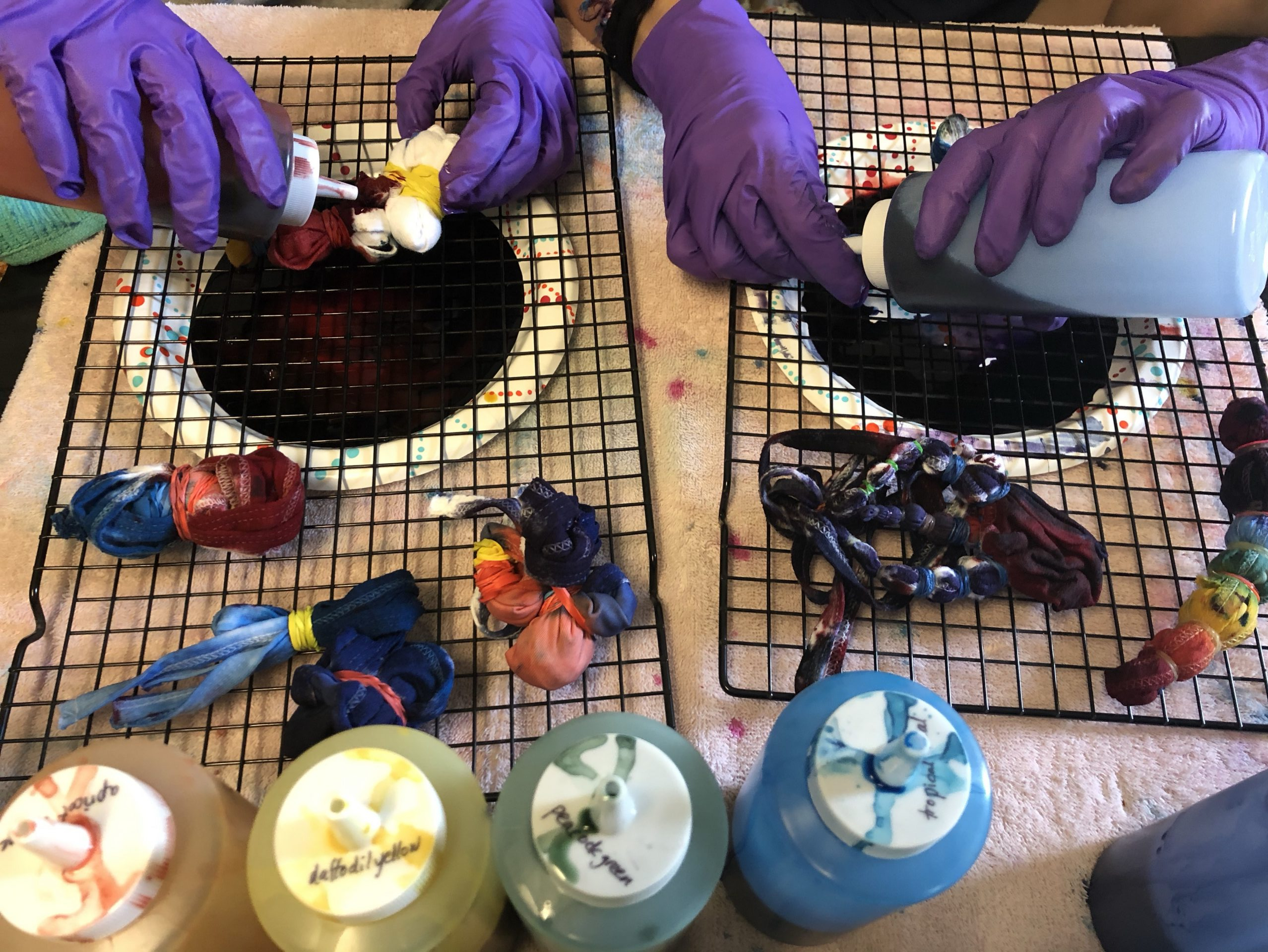 Definitely watch your yellows and lighter colors. We ended up with a lot of less-than-ideal drips where blue was determined to prevail.

Once a mask was saturated enough, I vacuum sealed it and dropped it into a pot of near-boiling water. Intricate rainbows were sealed in their own bags, but if there were masks with similar color schemes (reds, blues, etc.), those shared a bag and turned out fine. 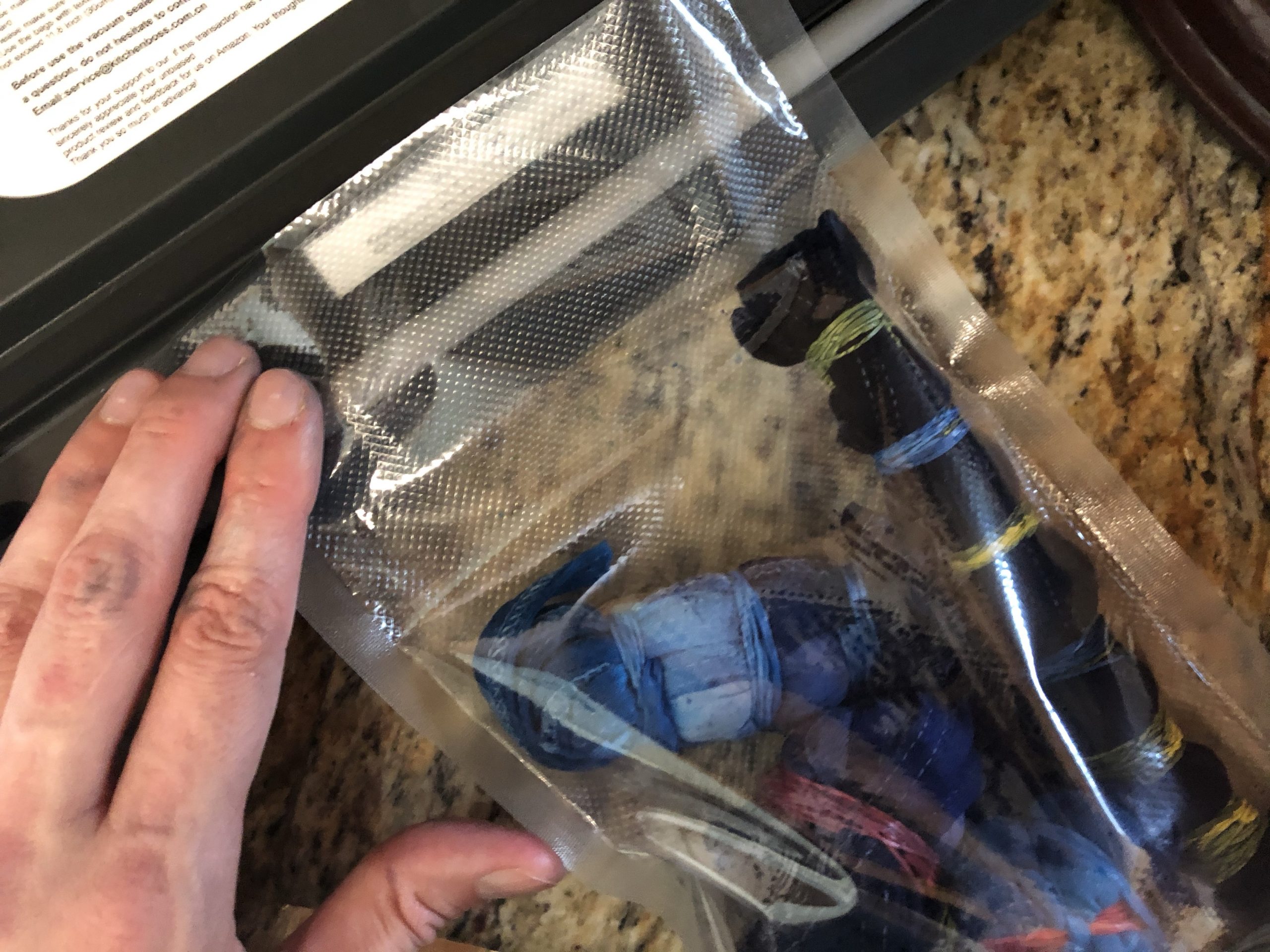 I used inching to get it just to the point where the dye started to leach out of the saturated fabric, then sealed the bag.

Boiling makes the water in the bag expand and also overflows the pot as the bags take up more space — I didn’t want that, I just wanted the water to heat the contents of the bags reasonably evenly. I debated using my sous vide stick but it would be operating at the top of its range and if a bag leaked, the stick would no longer be food-safe. Instead, I used some old non-food pots and kept an eye on the temperature. 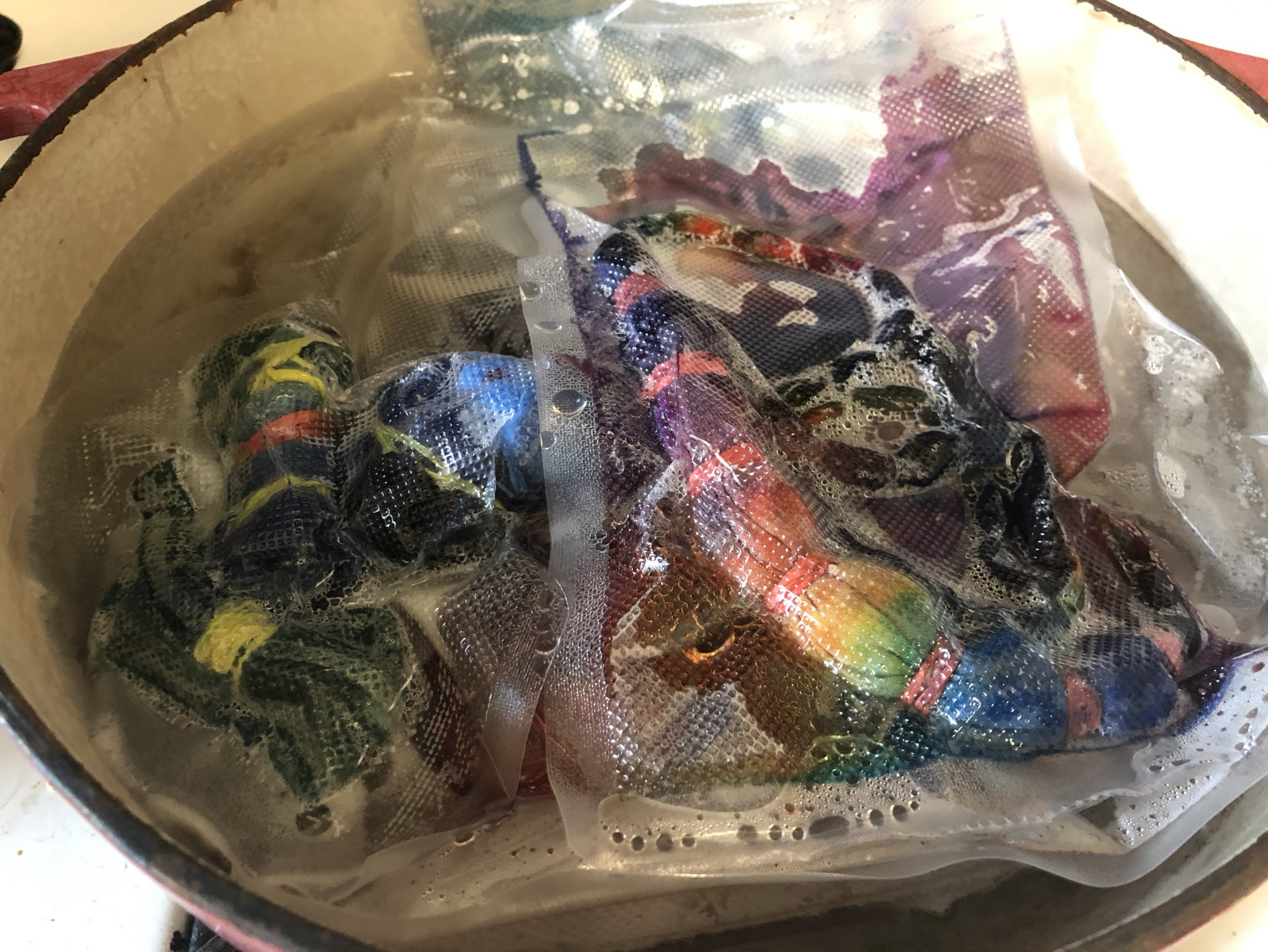 I ended up weighing down the bags with spoons and whatever I could find to keep them under the water level and cooked them at around 180-190F for about an hour, since polyester takes extra time and dye, according to the DyeMore instructions. 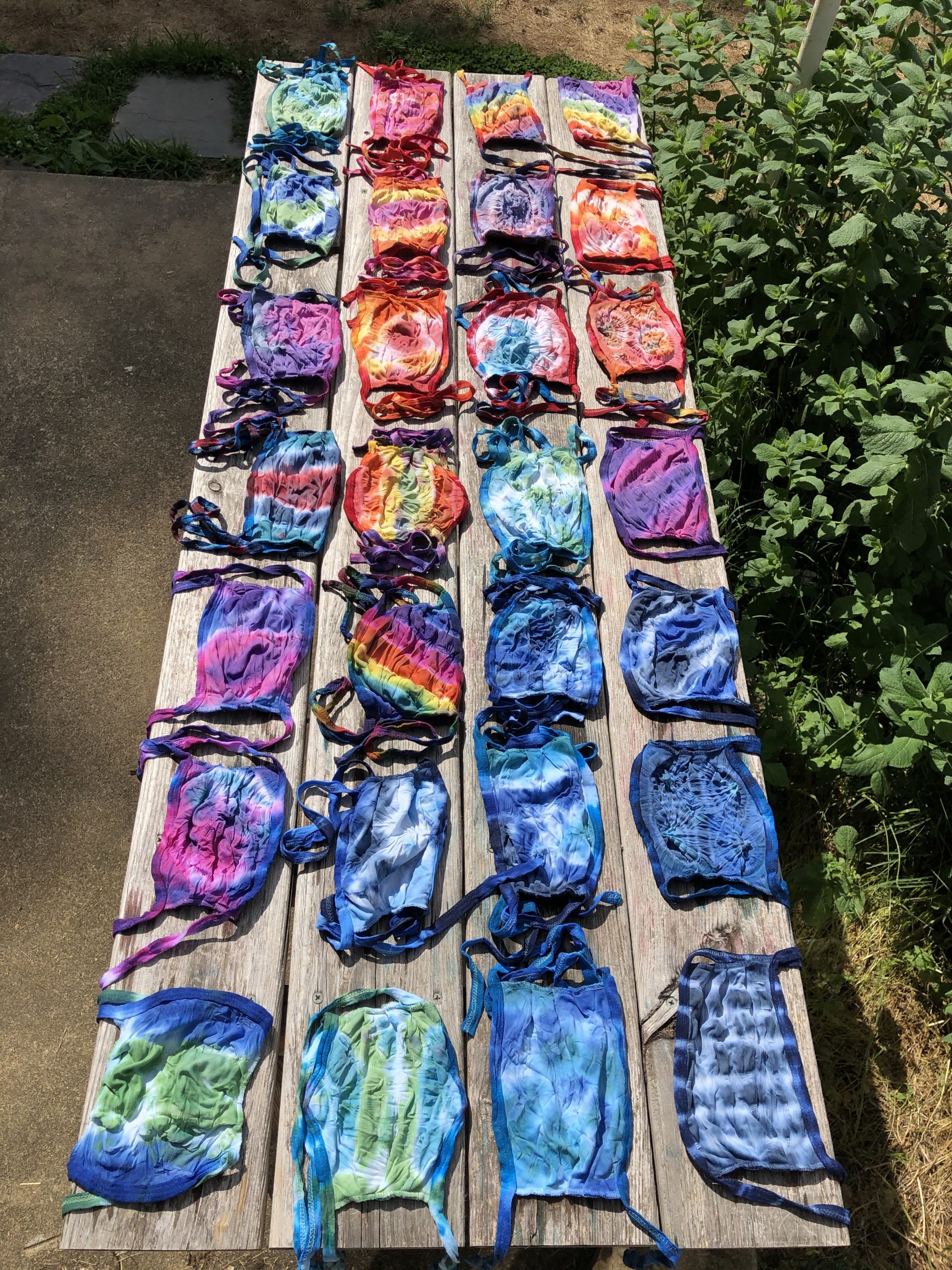 My table may never be the same again.

When time was up, we rinsed them in the sink and let them dry in the sun, then laundered them for the first time. Even though the colors were more muted on the polyester than on the cotton, they were still quite clear. 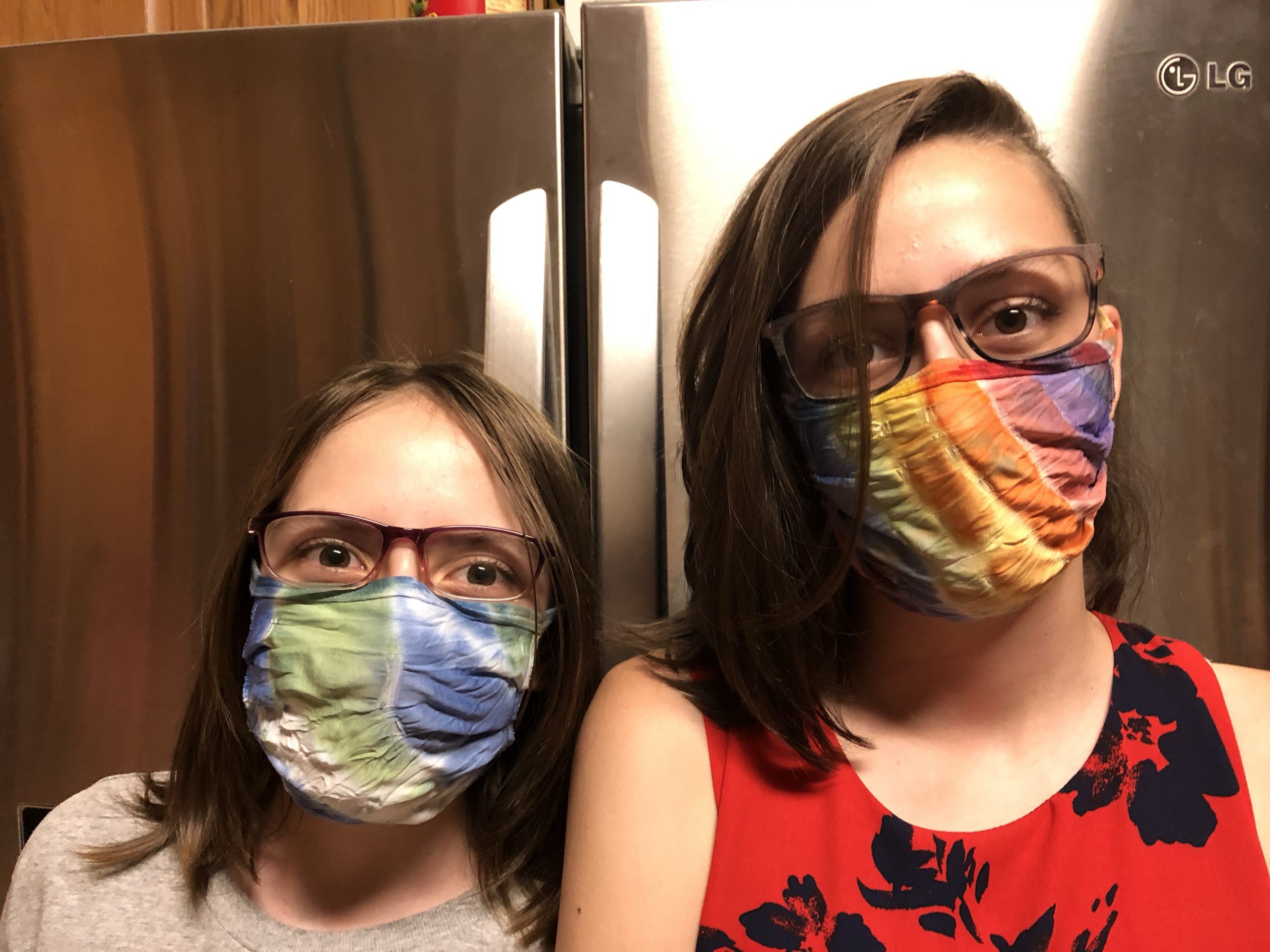