I ran across one today, [by enlarge](http://jeremiahgrossman.blogspot.com/2006/09/csrf-sleeping-giant.html) instead of [by and large](http://www.straightdope.com/mailbag/mbylarge.html). This ranks right up there with [for all intensive purposes](http://eggcorns.lascribe.net/english/32/intensive-purposes/). 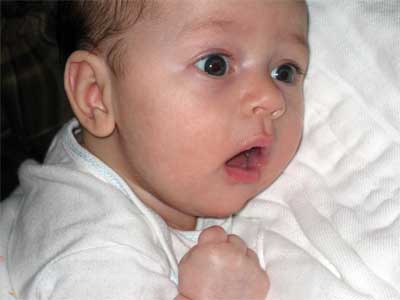 Still recovering from the aggravation of having to switch content management systems. It used to be that I could recommend Movable Type to clients, but I find myself leaning towards Expression Engine for actual content management and WordPress or TextPattern for weblogs.

I have a box of canned formula somewhere in my living room. I ought to find it and donate it or something. My breasts are functioning just fine (if a little _too_ fine at times) and this box is just sitting there annoying me. More stuff for me to get rid of because it is taking up space! And not only that, but stuff that some people really need, so I’d feel bad if I just threw it out. Bah, humbug, formula companies!

Too many things on my to-do list. Today, though, is a day off. I will wash dishes and fold laundry and knit and otherwise goof off.

So, if you’re using an unpatched version of Movable Type, you might want to patch it or upgrade to MT3.33. If, however, you’re a kook like me and just can’t take the news that a mandatory security upgrade/patch stayed completely under your radar because the news was allowed to scroll off the Movable Type site feed…

Squishy weighed in at 11 pounds, 12 ounces at her two month well baby checkup this morning. It would have been more if she hadn’t pooped beforehand. The doctor admired her Little Beetle ONE diaper and showed off the Snappi to the intern who was following him on his rounds. The intern looked a little puzzled by the use of cloth, but the doctor said that he wore cloth diapers when he was a baby. They fiddled with her feet and played poke the baby (but not too much, because I had been nursing her when they arrived) and said she was a “perfect baby”. Then they sent in a nurse to give her shots.

The weather was miserable, but I drove to and from the office without incident. First time driving since I was seven months pregnant or so, and it had to go and rain. After the appointment, I stopped at Giant on the way home to get milk and bread and cheese, just to prove that I could actually be out and about with the baby and without any backup.

The afternoon was royally trashed, though, when she woke up from her car-induced nap. Holy crap, the screaming; it was horrific, and I’ve never heard anything like it from her. Every time she moved her leg, it hurt. Because it hurt, she would scream. Because she was screaming, she would move her leg. Talk about miserable. Finally managed to find a perfect position for her to sleep in and settled in to hold her and snuggle her and make it all better.

It was a day. This evening I need to work on a PSD-to-CSS conversion and convert this blog to WordPress. I don’t think I can handle using Movable Type any longer. Every time I log in, I want to scream and tear my hair out.

In one day, I will be at Squishy’s two-month well baby checkup.

In ten days, I will be in New Jersey.

In fourteen days, I will be in Chicago.

And in twenty days, I will be back at home.

1. The only thing staving off the baby blues is large doses of chocolate in the form of Lindor truffles. Exhausted? Eat a chocolate. Frazzled? Have another. My complexion doesn’t seem to mind, neither does my waistline. From my hips to hers, as it were.
2. Her name is officially Squishy. Really, we were going to go with Madeline, but Squishy is so much more appropriate.
3. I did the cloth diaper thing. Prefolds are right up my alley; years of origami folding finally pay off.
4. Holy non-diaper-escaping baby crap, but [these diapers](http://betterforbabies.com/organic_cotton_diapers.html) are the bestest diapers ever. Matthew may finally be able to change a diaper on his own. I swear, I would totally buy underwear made out of this material. Softest. Velour. Ever. Ended up getting a few (a very few, but they are worth every penny) for Matthew to use when he changes diapers, nights, and traveling, since juggling a squirming Squishy, a prefold, a doubler, diaper lotion, and wipes can get complicated.
5. Marcus is studying Canada. Rebecca is studying Mesopotamia. Both are doing well in their math and reading. Science textbooks for children… well, they’re better off reading a selection of non-fiction science books, and let’s leave it at that. Regular walks to the library help get us all out of the house. Squishy usually falls asleep in her sling after the first block.
6. I have a five gallon pail of laundry detergent in my living room at the moment. 1,280 loads’ worth. I do a lot of laundry.
7. Squishy likes listening to her CDs. Squishy likes listening to her CDs a lot. Matthew and I can sleep through her CDs, we are just that tuckered at the end of the day.
8. Squishy also likes listening to Tim Gunn. Squishy may discover a love of fashion later in her life, because I have a playlist of all Tim Gunn, all the time.
9. Marcus is warming up to Squishy. He offered to hold her while I got him a snack the other day. For an eight-year-old boy, that’s warm.
10. Rebecca loves her little sister. God help me, but I got her _The Little Mermaid_ DVD for her upcoming birthday. And _Cinderella_. I am so going to hell.
11. I cannot upgrade Movable Type, because 3.3 breaks tags something fierce for me. Instead of taking out my frustrations on my defenseless computer, I have been knitting. Rebecca has cabled mittens. Squishy will have a jumper. Yay, knitting.
12. Mostly human. Mostly.

Says I, “Um, you realize where you got the nickname ‘Squishy’, don’t you?”.

Says I, “_Finding Nemo_. You are calling her a jellyfish.”