I Should Be Used To This By Now

Oh, look, she’s hanging upside down with her knees and her hands.

Oh, look, she’s hanging upside down with her hands.

Oh, look, she’s hanging upside down with one hand.

Oh, look, she’s not hanging upside down any more.

She stood up, brushed the leaves out of her hair, and grinned sheepishly at me through the kitchen window.

Comments Off on I Should Be Used To This By Now

Comments Off on So Unfair

Posted on 21 October 2007 | Comments Off on Spectacular

A perfect October day. Not a cloud in the sky, a brisk breeze, an almost-empty park, and a trailer full of bicycles. We rode around the loop twice with the baby in her trailer; afterwards, the kids raced around an empty parking lot tracing lazy figure-eights and swerving between curbs. But then Marcus had to up the ante and instead of following the gradual path down the hill, he rode straight down the side screaming with glee.

And where Marcus goes, Becca must follow, only faster. As she stood at the top of the hill–out of earshot and unwilling to listen to common sense, regardless–I remarked to Matthew, “This is going to be spectacular.”

I hate being right.

She skinned her elbow and her bike helmet is a write-off. It bounced off the asphalt at the tail end of her fall, so we’ll destroy it and throw it out and get a new one. It saved her noggin, that much is certain. She made it most of the way down and only flew off the bike at the end of the run where her path crossed the concrete. A shower, some peroxide, and a cup of tea later and she’s recovered enough to wish she could go back in time and undo her actions.

Maybe she learned something this time, but I’m not really counting on it. Her ballet teacher was already impressed with Becca’s black eye and scraped up face from the incident involving the rope swing, the tree root, and Marcus, where blame is evenly distributed between the two of them.

That said… it was pretty darn spectacular.

P.S. Bike helmets save lives. Right now, she’s drinking her tea in the kitchen while teasing her brother.

Comments Off on Spectacular

Marcus pipes up with, “I can’t wait until I mate.”

Comments Off on Say What?

1. There are currently five tadpoles living in the kids’ room. Tadpoles!
1. With the help of Elie and Laura, we finished framing two walls of the shed. Progress!
1. I have another two hundred lines of code to go in order to implement search functions for the campaign database and optional notification emails and the eventual mass emailing of sponsors and bloggers and handling blogs that drop out of the Blogathon. Code!
1. Rebecca had uneven red-eye in a photo from last night and now Matthew has me in a state of constant worry over whether she has a blood clot in her eyeball that will lead to an aneurysm. Panic!
1. I may eventually have time to design a site for myself. Possibly.

Comments Off on Five Things Of Note

Posted on 24 July 2005 | Comments Off on Utterly Charming 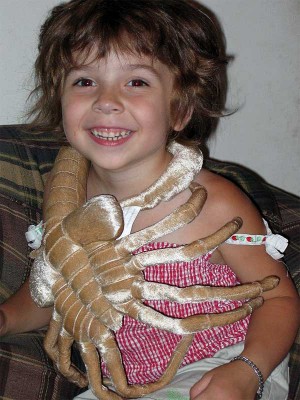 My [older younger sister](http://www.athenasbanquet.net/) is wicked and evil. I have great hopes for smiting her come Christmas.

Rebecca is quite taken with the facehugger. Really. Hug it and squeeze it and call it George, indeed.

Comments Off on Utterly Charming

Lately, I’ve taken to having a Stonyfield Farm Vanilla Truffle yogurt for breakfast with a piece of fruit. However, I am particularly possessive of my yogurt, as I’m not really big on breakfast and finding something acceptable is difficult. If the kids ever tasted it, I would no longer have any breakfasts left in the fridge.

“Mom, why is your yogurt brown? Is it chocolate?”

I am a horrible mother.

Comments Off on Child-proofing