Spinning all the plates

Over the past few years of working full-time, I’ve tried a couple of different recipe services that were supposed to make meals easier by providing grocery lists and recipes. I usually ended up having to veto half of the recipes for using expensive or hard-to-find ingredients (scallops for six) or having limited appeal to kids (salmon and legumes). Some of the recipes were just not very tasty; I remember a spectacular fail of a cheeseburger casserole that was both salty and flavorless. Some of the recipes from a gluten-free service plan ended up telling me to omit ingredients including gluten rather than building a meal around other options like rice or quinoa.

I spent the last year flying by the seat of my pants and making about ten rotating things (and a lot of pasta) for dinner. In December, I threw in the towel and started looking at apps that dealt with meal planning.  I was not interested in a monthly or yearly subscription, so I was willing to pay for an app that would do what I wanted with a minimum of fuss.

After a lot of reading, I settled on Paprika Recipe Manager, an app that is available for purchase on every platform that I use. I tried out the iOS version before springing for the Mac app; each platform is a separate purchase. Paprika handles recipes, categorization, shopping lists, and meal planning with a fairly intuitive interface. All of my devices sync across my account, so changes that I’ve made on my computer while planning a week’s meals are reflected in the grocery list on my phone.

I can drag and drop recipes onto a calendar for that month and plan out a week’s worth of cooking before I hit the grocery store. 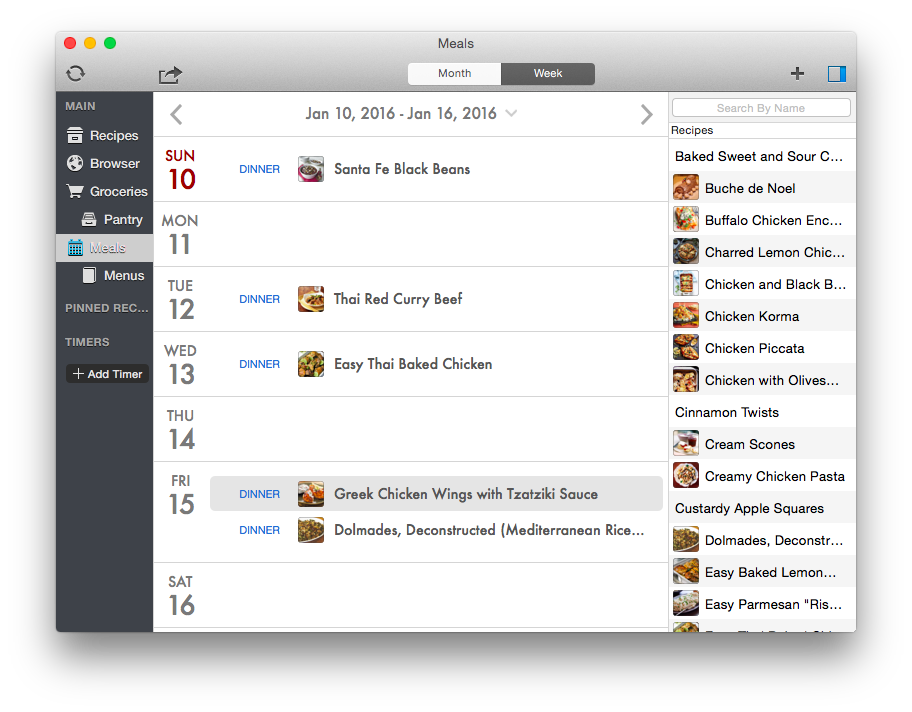 Once I’ve decided on a menu for the week, I can combine the ingredients that I don’t have into a shopping list and sort them by aisle. Recipes can also be scaled up or down depending on the initial number of servings. 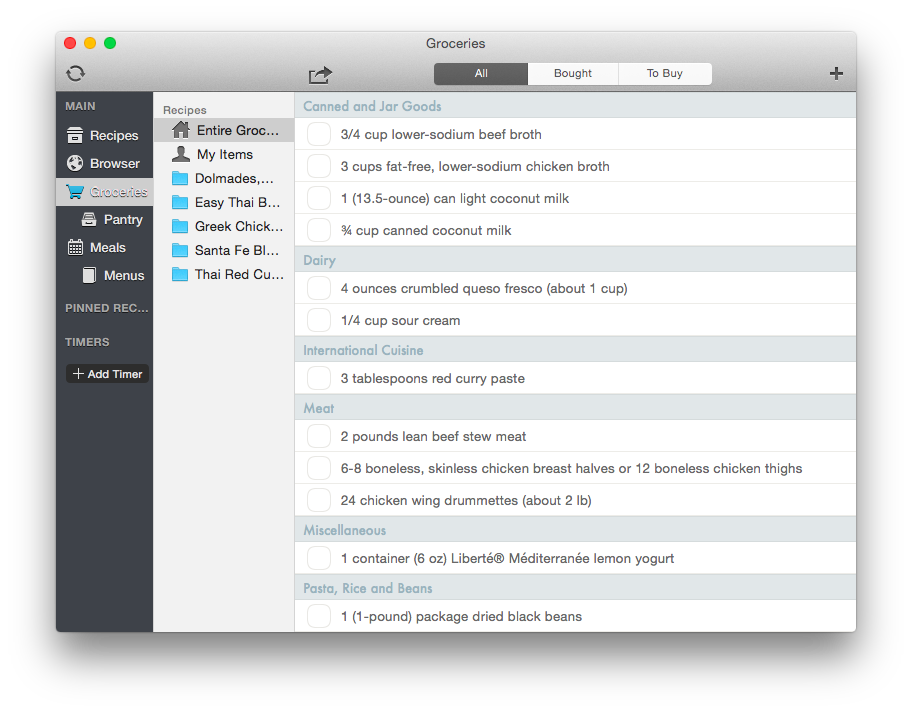 The “Save Recipe” bookmarklet is the real game-changer for me. It seems like every recipe web site has its own bookmarking service, and adding recipes to this blog or using a centralized linking platform like Delicious still left me visiting each page to grab ingredient lists and instructions. With the bookmarklet, I can browse for recipes that sound like a good fit for my family and just click on the bookmarklet; the recipe is automagically imported into Paprika. This is a real livesaver for my browser tab situation, where I’d leave interesting recipes open and just collect them before dumping them all to my blog. The bookmarklet also saves the URL of the recipe so I can easily find and share it later.

I’ve been trying to make healthier meals that the kids will still eat, which means trying out new things. In Paprika, it is easy to edit imported recipes; last night I tried out a recipe for Greek turkey meatballs, but instead of shaping the mix and including a binder, I cooked it like taco meat and sold the pitas as “Greek tacos” — meat crumbles and salad in a pita rather than a taco shell. It was met with rave reviews, so I edited the cooking instructions and added a 5-star rating. I can also add a difficulty rating so that I can hand out cooking assignments to the kids based on what they can handle.

After struggling for years with balancing work and providing a hot dinner at the end of the day, this is a tool that looks like a net win.

Disclosure: I have no relationship with Paprika Recipe Manager or Hindsight Labs LLC. I bought it myself.

Like Loading...
This entry was posted in Live and tagged apps, cooking, recipes, software. Bookmark the permalink.

3 responses to “Spinning all the plates”