I spent the better part of my Saturday learning about handguns at Shooters Paradise in (as the instructor very aptly dubbed it) Hoodbridge. We got there an hour early so we took the kids out for burgers at Five Guys and then I headed over to the Basic Pistol I class.

After several hours of instruction and learning the protocols and range rules and practicing loading, aiming, firing, and unloading with plastic cartridges, we spent an hour on the range. I definitely liked the revolver better than the semiautomatic; it seemed far, far more manageable and just less… um… big bang.

Took copious notes, loaded and fired both the revolver and semi until I was out of ammunition, learned about carry laws in Virginia, stuffed my brain with information so as not to be entirely stupid… All in all, a very good way to spend a Saturday. Matthew still thinks I’d be safer with a semi, I tend to disagree. If I’m afraid (not intellectually, but gut-quiveringly and teeth-clenchingly) of using it on the range, I sincerely doubt I’d be any happier carrying it in the short term. Longer term, I’m fairly certain it could grow on me–but not yet. 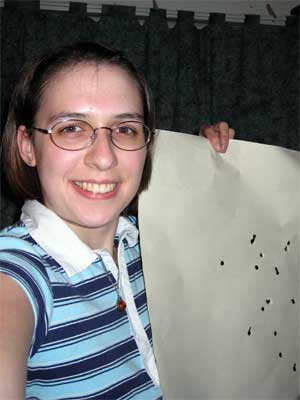 Matthew was even more productive. While I was at the range, he stayed home and framed and hung the window that he brought home on Friday. A window! In our shed!

Siding will probably happen next weekend, I think he’ll be wrapping up the soffits tomorrow.

One thought on “Shoot”