We pulled a late-night [SciFi Channel](http://www.scifi.com/) watching spree on Saturday night, and were treated to _Hammerhead: Shark Frenzy_ and _Dark Waters_. Of the first, I can say only that Matthew was cheering for the shark. Also, the fuel tanker. Because clearly, if there are bad guys hiding behind a fuel tanker, it is time to fire at it.

With _Dark Waters_, I went through the entire movie thinking, “Gosh, the hero looks like Lorenzo Lamas, but… he was in _Renegade_. He wouldn’t be in a shark movie this horrible… would he? No, of course not. That must be someone else.” 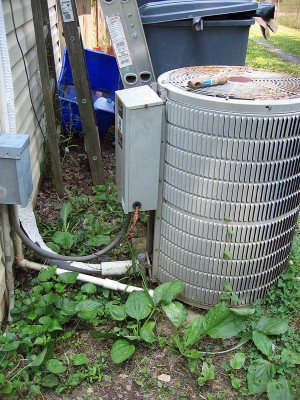 Our Carrier air conditioner is fifteen years old. Last summer, it kind of died in late August. Since the weather was fairly mild, we managed by opening up the windows and using fans. However, when July weather hit in early June, it was pretty clear that we’d need to fix it or replace it for the summer. Being ever so handy with tools, Matthew went out to look in the access panel and found more carbon than he should have. Apparently, the ceramic capacitor had released its magic smoke, which did a great deal to explain why the fan blades had stopped turning–there was nothing to impel them to start rotating. 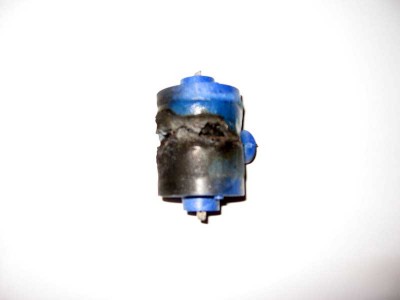 So, a blown capacitor. It should have been an easy fix, right? Call around to HVAC shops, find one with the part in stock, that sort of thing. Oh, but no.

I started by calling Yorkshire Plumbing Supply in Manassas. Unfortunately, they didn’t carry much in the way of HVAC equipment, but they kindly referred me to Lyon, Conklin & Co. in Chantilly. Unfortunately for me, Lyon, Conklin is in the business of parts wholesale, not retail. Okay, I could handle that. I wasn’t in the market for a gross of capacitors.

Next, I had a bit of an idea and called Sears Parts & Repairs. They would love to have sold me a replacement part but unfortunately, they didn’t carry parts for Carriers. Again, reasonable. The service representative did give me the phone number of Carrier.

Carrier was kind enough to give me the name of their dealership in my area, and I promptly called ARS Service Express of Manassas. This phone call, however, did not go as swimmingly as I might have hoped. The only way they would sell me a part for my air conditioner was if they made a service call. Because clearly, I’m an idiot who can’t spot a blown capacitor.

Matthew did a good deal of googling and came up with a page on the Arnold’s Service Company web site. It had a picture of what appeared to be exactly our capacitor (minus the scorch marks) as part of a Bryant/Carrier Thermal Start Kit. We took a chance and ordered it, as it was still cheaper than getting a repairman out to replace the part and bill us for labor. 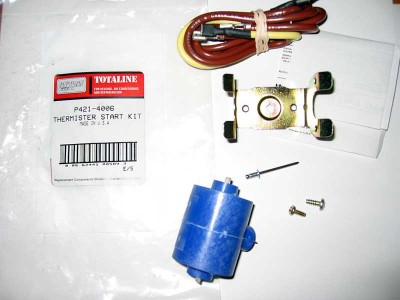 It arrived today, along with some other goodies. A comparison of the numbers is as follows:

I am a totally happy and satisfied customer of Arnold’s Service Company, which is a do-it-yourself-er’s dream.

The not-so-good news is that the AC unit needs a freon charge (which is typical), so we still don’t have AC. However, we’re one step closer to, oh, being able to get through the day without a mid-afternoon meltdown. (However, it does work and cycle on; the low freon charge is just preventing it from being able to produce enough cold air to make a difference.) Guess I’ll be calling Sears again tomorrow. 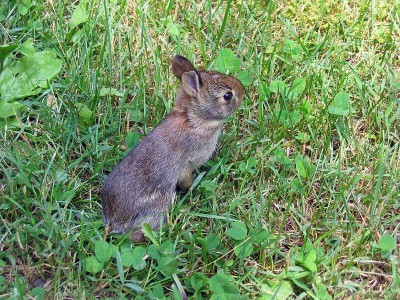 Well, the day has finally arrived. This morning when I went to check on their form (the hollowed-out nest lined with straw and rabbit fur), it was empty. One of them was sniffing about nearby in the shadow of a dandelion, so I took a few pictures before it ran away.

I’m not sure if they’ll come back to the form to sleep or not, but the kids have strict instructions to not bug the bunnies. They’re absolutely adorable.

Lately, I’ve taken to having a Stonyfield Farm Vanilla Truffle yogurt for breakfast with a piece of fruit. However, I am particularly possessive of my yogurt, as I’m not really big on breakfast and finding something acceptable is difficult. If the kids ever tasted it, I would no longer have any breakfasts left in the fridge.

“Mom, why is your yogurt brown? Is it chocolate?”

I am a horrible mother.